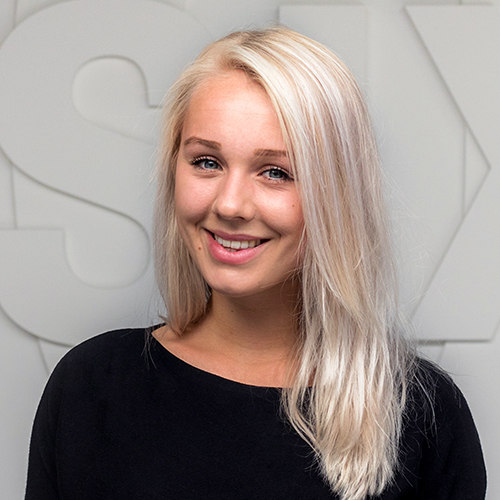 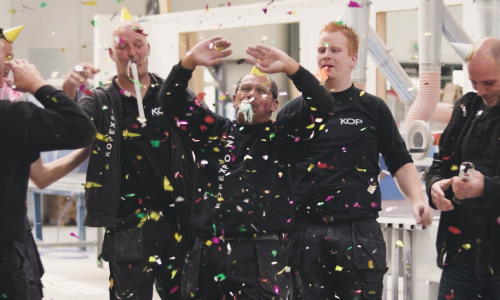 This year KOPexpo celebrates it's 10th anniversary. From a small company with big plans to a professional organization with, well, big plans. How did KOPexpo develop itself in these 10 years? We've summed up the most remarkable and important moments of these past 10 years. Enjoy!

After years of stand construction Ed Kamp and Marius Bos decided to start working independently. They wanted to distinguish themselves from the industry by delivering real quality exhibition stands and offer more than just the stand: they wanted to help organizations grow by using exhibitions as a powerful marketing and sales tool. By the end of 2007, they founded KOPexpo.

In order to realize the plans of Marius and Ed, they needed a facility including an office and a workplace. It didn't take long until they found the right property in Apeldoorn, the Netherlands. From the first week on, the company was operational.  Together with their proud estate agent, they posed for the infotorial of the regional Business Magazine.

It's 2009 and Ed and Marius get in contact with the first big brands, including Honda. They create their first design for the motor show expo in the Netherlands, which they later decide to outsource. The contact with Honda remains and will later result in many beautiful projects (see photo). 2009 is also the year that Marius decides to step out of the business because of his personal situation. Ed takes responsibility for the continuation of the company.

More and more companies experience the benefits of KOPexpo's exhibition services and the customerbase grows steadily. Then, after six months of absence, Marius decides to join the team again. He takes responsibility for sales and development, while Ed is involved in project management and realization of the exhibition stands.

This year is characterized by stability and growth. An additional 5 employees are hired: Wessel at the design studio, Tim and Aart in the workshop and Martijn in the construction team. Today, all five are still part of the team. Furthermore, an important purchase was made this year. KOPexpo's little truck is replaced by their first MAN trailer, including a cage. This is a milestone for KOP, because the organization of their transport can be majorly improved. Besides this, their visibility on the road and at exhibitions is increased.

With their new colleagues and trailer, KOP develops well. More and more companies are getting to know the enthusiastic team of expofessionals. The number of employees has now tripled and the number of customers is growing fastly. A little new member is added to the team: Jack Russel Teun.

In 2013, Marius and Ed participate in humanitarian transport to Romania with their trailer. In cooperation with driving school De Weerd, they travel throughout the country to visit local schools and to bring school furniture. The local population is very happy with the brought items and at every school they are warmly welcomed with delicious meals. Thanks to the friendly people and the beautiful landscape, this has become an unforgettable journey for the men. By the end of 2013, Ed announces to leave the company because of health issues. Marius continues KOPexpo's development with the rest of the colleages.

The KOP team discovers their sporty side. In 2014, the team signs up for their first out of three Dragon Boat Races. This is the start of many sportsevents like several runs, personal trainings and of course the yearly participation to Duchenne heroes in which we mountainbike 700km in one weer to raise money for medicines for children who suffer from Duchenne muscular dystrophy.

KOPexpo has literally outgrown its property in Apeldoorn. It's time for a new office with more room for growth and development. This new location is found in Vaassen, the Netherlands. In 2015, all preparations are made for the big move. At the old location, everything is packed while the new building is completely furnished.

In 2016, KOP moves to Vaassen. The new office is a  move is a large, open space of more than 700 m2 with various workspaces and rooms. The workshop and the warehouse are located downstairs, and together count over 1700 m2. In addition, one area has been turned into a real office gym so that employees can workout before, during and after work. Overall, the new property is a pleasant working space for the entire team. Also, the new website has been launched this year.

This was the year of improvement, change and development. New technologies made their appearance and KOPexpo automated its processes even better and further. KOPexpo immersed in VR, AR, marketing automation and much more. Besides this, the team exhibited at the Europshop with their very own stands to improve their national and international network.

We want to say thanks

To all our customers, suppliers and employees: Thanks for these amazing 10 years! Because of your involvement, trust and dedication, KOPexpo has grown to the organization that it has become. In the upcoming years, will focus on further development and professionalisation, both nationally and internationally. We look forward to many more beautiful years.

Cheers to the upcoming 10 years!

If you want to be notified about new blogs, please fill in your email address to subscribe to our newsletter.

By Lieke Bos Business Developer
BACK TO BLOG
SHARE

Also interesting for you